Working for the Fox Sports 1 channel, 38 years old Charissa Thompson is a sportscaster and an American TV host.

Charissa Thompson began her career as a sports news announcer and television host by working for Fox Sports in the beginning. She has also worked for SportsNation Versus, Big Ten Network, ESPN, and GSN. 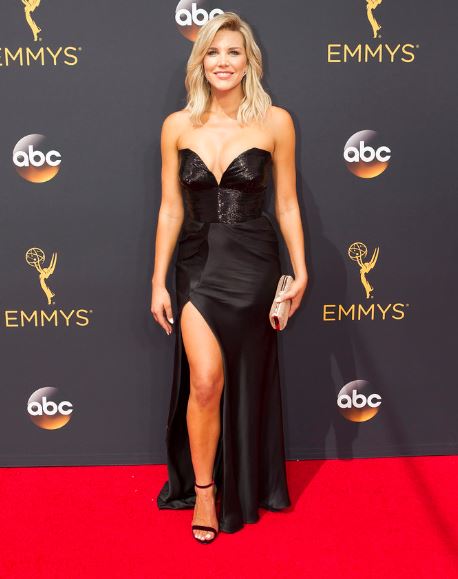 She was born in Seattle, Washington on May 4, 1982, in the United States. From the very early age of her childhood, she realized that she wanted to be a broadcaster. Thompson did her schooling at Inglemoor High School in Kenmore, Washington.

Later, she moved to Washington State University and then went to California for attending community college thereby gaining California residency. In 2004, she graduated with a bachelor’s in Law and Society from the University of California, Santa Barbara.

Charissa Thompson has shown her appearances on baseball programs like “The Baseball Report” on FSN and “MLB All-Star Game Red Carpet Parade” in 2007. From 2002 to 2006, she also presented the Atlantic City Lottery show.

Charissa has appeared in several tournaments as a host like “Shaq Vs”, “NFL Now Updates”, “Fast Track to Fame”, “BCS National Championship” and more.

‘FIFA World Cup’, a global and major event on football was also covered by her for Yahoo! Sports in South Africa. It’s because of her hard work, she is on top as a female sportscaster. Charissa joined Fox News Sunday in 2018 as a reporter.

Thompson is a pretty gorgeous lady who is respected by many people involving her friends and colleagues. Her hot figure and cute face made many boys fall in love with her.

She fell in love with Jay Williams, an ESPN analyst, in 2013. After enjoying two years of relationship, the pair decided to separate in 2015. Moreover, Jay is now relishing his married life with Nikki Bonacorsi.

Now she is enjoying the perks of single life and there is no news whether she is currently dating anyone or not. Nevertheless, at the age of 25, Charissa married a guy but she has not disclosed the name of her ex-husband.

The couple decided to end their marriage through the divorce but she always praised her ex-husband for being there for her during low times. Even after the divorce, the duo still maintains a decent relationship. She has no children from her ex-husband.

Once in January 2018, Charissa’s came to highlight when her intimate nude images of her boyfriend were leaked and viral all over the Internet.

Charissa did not speak for a long time and was embarrassed by what happened. but she finally opened up in June 2018 exclaiming that her iCloud account had been hacked and the pictures were taken from it. She had sent those photos during her long-distance relationship to her boyfriend.

No doubt Charissa Thompson is a gorgeous face lady with a hot body. She is a dream girl for many youths. She stands 5 ft 9 in height along with a body weight of 58 kg and has blonde hair which enhances her beauty to the next level. Her figure of 36-23-35 by which we can assume she is a gym person.

Her current net worth is calculated at around $3 million. Moreover, the talented host receives $700,000 per year as a salary.