Demi Lovato is an American singer and songwriter. She is also an actress. She is best known for her role as Sonny Munroe in a series named Sonny With a Chance which was aired on the Disney Channel from 2009 to 2011. She is well known for her album, Here We Go Again. She is also famous on social media platforms. She came into the spotlight after dropping her debut track ‘This is Me’. Her debut song was ranked at number nine position on Billboard Hot 100. Her album Don’t Forget was ranked at number two on the U.S. Billboard 200. 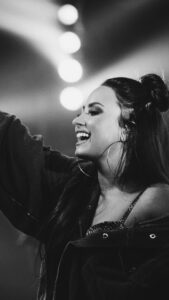 Demi Lovato was born on 20th August 1992. Her birth name is Demetria Devonne Lovato. She is American by nationality and her ethnicity is multiracial. She spent her childhood in Albuquerque, New Mexico, USA. Her father’s name is Patrick Martin Lovato, who is an engineer and her mother’s name is Dianna De La Garza, who was a famous Dallas Cowboys cheerleader.

Demi has an elder sister named Dallas. Her maternal half-sister’s name is Madison De La Garza, who is a famous actress. Her fraternal half-sister’s name is Amber. Demi’s parents parted ways in 1994. Since her childhood, she has had a keen interest in music. She started playing piano when she was seven. She started playing guitar at the age of 10. She also took dancing and acting courses.

She has homeschooling due to bullying at school in Dallas. She completed her high schooling in 2009.

Demi started off her career with a television series named Barney & Friends in 2002. She even started playing guitar and piano at the age of 10 and even took dancing and acting courses.

In 2008, she played the character of the lead role in the movie named Camp Rock. She also featured in the series Sonny with a Chance. Her debut single and album was a great hit among people and it has been certified gold. She released her two singles, “La La Land” and “Back”.

In 2009, Demi released her first studio album Here We Go Again, which was ranked at number one on Billboard 200 and has sold around 60,000 copies across the globe. In 2011, she dropped her third studio album ‘Unbroken’. It has been a massive hit and earned gold certification in Brazil, the Philippines, Chile, and the United States. To date, she has released five studio albums.

Demi dropped her fourth album, ‘Demi,’ in 2013 and was ranked at number three on the US Billboard 200. It also received gold certification in Canada, Mexico, the United States, Sweden, and the UK. She released her fifth and sixth albums, Confident and Tell Me You Love Me, in 2015 and 2017 respectively.

Demi’s estimated net worth is around $40 million. She made over $24 million from her recent musical tour. She accumulated a lot through her professional career. She has released six albums which earned her recognition and fame along with a hefty fortune. One of her singles, This is Me, has sold over a million copies across the globe. Her acting career also contributed a lot to her net worth.

Demi is currently dating Max Ehrich. The duo announced their engagement on 22 July 2020 through their social media handles. Demi announced it with a caption saying: ‘I knew I loved you the moment I met you. It was something I can’t describe to anyone who hasn’t experienced it firsthand but luckily you did too.. I’ve never felt so unconditionally loved by someone in my life (other than my parents) flaws and all. You never pressure me to be anything other than myself. And you make me want to be the best version of myself. I’m honored to accept your hand in marriage. I love you more than a caption could express but I’m ecstatic to start a family and life with you. I love you forever my baby. My partner. Here’s to our future!!!!’

Earlier, she dated Austin Wilson, a well-known model of America.

● Her hobbies are riding, swimming, and dancing.

● When she was a little girl, her dad used to call her ‘little partner’.

● She is a trained karate player.

● At the age of eighteen, she went to a rehab center.

● Demi made a documentary about her recovery, which aired on MTV.

● She is a supporter of the LGBT Community and believes in quality and homosexual marriages.