Gabriel Conte is an American-based YouTuber, model, and social media influencer. He is famous for his funny videos. He started making videos on Vine, then he decided to launch his own YouTube channel. He is also an actor. He is famous for his role as Matt Johnsmeyer in a comedy TV series, Mr. Student Body President. His debut film is The Passion. One of his videos on Vine gained more than 1 billion loops with more than 2 million followers. He even worked with the brand Coca-Cola. 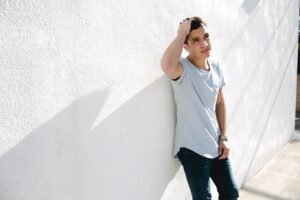 
Gabriel Conte was born on 24th October 1994, in Miami, Florida, USA. His father’s name is JC Conte and his mother’s name is Grace Conte. He has two siblings named Nico Conte and Sofia Grace. He is an American by nationality and his ethnicity is multiracial.

Gabriel has not revealed anything about his high schooling. Gabriel enrolled for a bachelor’s degree in Fine Arts. But he dropped out of college to focus on his career. He started uploading videos on Vine in 2013.

Gabriel Conte is a man full of talents who tried his best to excel in those. At first, he was interested in his father’s real estate company. He tried twice to get a real estate license but he failed both times.

After his unsuccessful attempt to get a license, he started uploading videos on Vine. In his first six months, he gained over 10,000 followers. In the same year, he enrolled in a college to pursue Fine Arts in acting. But later decided to drop out of college. He claimed his first deal for $40. Then, decided to launch his own YouTube channel under his name.

He currently has more than 1.8 million subscribers on his YouTube channel. Gabriel has also launched a site called Gracecoffe, which sells coffee beans and mugs.

Gabriel contributed his voice to a movie called Spies In Disguise. Gabriel portrayed the role of Clemont in a YouTube comedy web series called Foursome in 2016. He even played the role of Alvaro Villanueva in a series, Guilty Party. A modeling agency named UTA talent signed him as a model.


Gabriel’s estimated net worth is over $1 million. He accumulated a lot throughout his professional career. He is the brand ambassador for Coca-Cola and even worked as a model for the brand. He is also an actor.

Gabriel was dating Jess Bauer, an Australian singer, and YouTuber. They met through their social media handles. Later, Jess made a trip to Los Angeles where the duo met each other for the first time. Gabriel even made a surprise trip to Australia to meet Jess where he proposed Jess with a ring.


In 2016, Gabriel and Jess took their wedding vows in Brisbane. Later, Jess moved to Los Angeles with her spouse. The couple launched a Youtube channel named GabrielandJess, which has 3.23 million subscribers. Jess has a youtube channel under her name. Her channel has more than 2 million subscribers. The couple also launched an online clothing store, JessandGabriel, where they sell joggers, T-shirts, posters, sweatshirts, etc.

tested turning my comments off on ig (and you guys noticed lol) to see if it would positively affect my mental health towards, and overall relationship with social media right now. i don’t have that much of a conclusion other than, i need to spend time off social media as much as i can. i just really don’t think we’re designed to be consuming curated information about everyone’s lives at every/any point of every day. constantly seeing so many peoples opinions in this echo chamber of negativity called social media really takes a toll on the soul. i know it’s different for everyone, but just know your boundaries and take care of your heart and mind. the world depends on it 🙂 ps. my comments are back on lol

● Gabriel has a decent height of 5ft 10 inches.

● Gabriel and his spouse have a pet named Milo Conte.

● In 2017, Gabriel was presented with the Best Costume award at the Steamy Awards.

● In 2017, Gabriel and his spouse, Jess, dropped their first EP titled under the Covers, Vol. II. Their song reached the Billboard Chart.