Jasmin Walia is a well known British-Indian singer. Besides singing, she is also known as a reality show star and an actress. With singer-composer Zack Knight, She has also composed English-Punjabi mixed tracks. They both together have composed blockbuster songs like Bom Diggy in 2017, Dum Dee Dee Dum in 2016, and Temple in 2017. Besides singing, the audience loved and appreciated her performance in reality shows like “The Only Way Is Essex”. In the British television reality series of 2012, she was given the promotion as a full cast member. 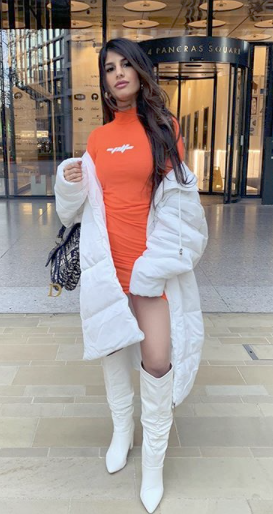 Jasmin was born in Chigwell, Essex, England, on May 23, 1995. She keeps a British passport, while she belongs to Asian (Indian) nationality. Moreover, Jasmin follows Hinduism religion. Jasmin has a height of almost 5 feet 4 inches (1.63 meters) and her weight is around 50 kg (110 lbs).

Jasmin’s parents are Indian, who came to England a long time back and got settled there. Her father’s name is Paul Walia but her mother’s name is still unknown to the public. Jasmin is called by the nickname ‘Sonam’ by her mother. Jasmin also has a brother who was born on 6 October 1993. His name is Danny Walia, who was also the cast in the seventh series of the reality show “The Only Way Is Essex”. Her parents realized her interest in singing so they got her enrolled in singing classes.

In the year 2010, she performed a role in which her fans and followers appreciated her acting skills in the TV series “An Officer and a Gentleman”. In 2012, She got popularized by being the cast member on “The Only Way Is Essex”. In the UK along with Zayn Malik, She was nominated as Britain’s sexiest Asian. The 11th series of The X Factor UK also gave her a chance for the auditions. With the varieties of lipsticks and beauty accessories, Jasmin created her own custom style, “Pop by Jasmin”. Walia also came to be a part of the Future Ambassadors Programme in November 2017 in a coalition with Lloyds Banking Group. Their main purpose is to empower students with mentors and role models and strengthening the talents among Britain’s younger women.

Jasmin keeps her personal life away from the media. Till now, the current relationship status of Jasmin is unknown to the public. However, Her last relationship was with Ross Worswick, the reality star of “Ex on the Beach’s”. Their relationship started in April 2014 but ended in June 2016. In April 2017, she opened up the reason for her breakup stating that she was so much busy in her music that she didn’t have as much time to give in a relationship. From then, she is still single. She has also dated James Argent in 2012, Charlie King in 2012, Dan Osborne in 2013, Gaz Beadle in 2013, and Jon Clark in 2015.

Tweets by jasminwalia Stay Tuned to Hollywood Todaysera for the latest updates!