Kristinia DeBarge is a famous American singer and songwriter. She is famous for her debut single Goodbye in 2009 which rose her to fame Currently, she is one of the famous pop and R&B singers in the music industry. Likewise singing, she is also known to the audience for her acting skills. She has performed movies like School Girls in 2009, Christmas in Compton in 2012, School Dance in 2014, and The Mint in 2017. Furthermore, she has done reality television shows like So You Think You Can Dance in 2009and Growing Up Hip Hop in 2016-2018. 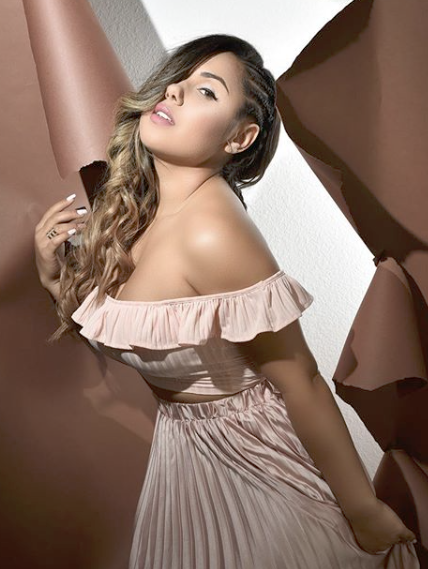 Kristinia’s full name is Kristinia Jamie DeBarge. She was born on 8 March 1990, in Pasadena, California, United States. By birth, She holds an American nationality, while she encircles a mixed-race of African-American, Mexican, Italian, Irish English, French, and Norwegian. The popular singer stands at the height of around 5 feet 3.5 inches (1.61 meters).

Kristinia DeBarge’s parent’s names are James DeBarge (father) who is a famous pop/R&B/soul singer, and Christine Mcdonald (mother). She grew up in South Pasadena in the state of California.

Besides, her parents are now divorced. presently, her mother, Christine Mcdonald, found another man and is married to him. Kristinia keeps on sharing the photos with her mother and stepfather on her social media. Kristinia’s mother was the second wife of her father James DeBarge. His first wife was an American singer-songwriter, Janet Jackson, before marrying Christine Mcdonald.

From an early age, the versatile singer-songwriter, Kristinia, got an inspiration to be a singer. Her father being a singer was the main reason for her rising interest in music and singing. Like by her father, she was also inspired by musicians like Mariah Carey, Alicia Keys, DeBarge, Christina Aguilera, Prince, and Aaliyah for her musical interest.

At the age of 13, she appeared on American Juniors making her singing reality show debut and managed to reach the Top 20. After the next four years, she got herself trained to develop her voice and writing skills with Kenneth “Babyface” Edmonds, the American singer.

At the age of 19 in July 2009, Her first album “Exposed” got released, following the second single “Sabotage” in the same month in July 2009. Her album and single-song were appreciated by her fans and followers, along with some websites like Blues & Soul, People Magazine, and AllMusic. During 2009, Kristinia got an opportunity to work for Britney Spears in her world tour “The Circus Starring: Britney Spears.”

She composed several hit albums like Exposed, Thinking Out Loud, and Young & Restless. In the same way, she is also a producer of several single songs such as Goodbye, Pink Love, Sabotage, and Alright.

As of July 2010, Kristinia’s net worth is calculated around $2 million.

When it comes to personal life, Kristinia is not much open to media. because of this, her current relationship status is unknown. However, as per the reports, she was in a relationship in the past with a man naming Home Town Kings (according to twitter).

Tweets by kristinia Stay Tuned to Hollywood Todaysera for the latest updates!