Laura Marano is a talented actress, model, and singer from America. She gained immense popularity through her acting skills. She made the breakthrough as a child artist with Stage Door Theatre, where she appeared in numerous projects. She’s best known for her role as Disney in ‘Austin & Ally’ which earned her recognition and fame. In 2017 she portrayed the role of Diana in a comedy-drama film named Lady Bird. For the role of Diana Greenway, she received many nominations for various awards. 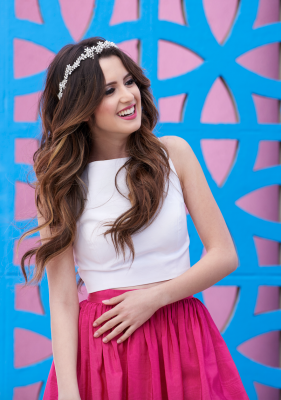 Laura Marano was born on 29 November 1995 in Los Angeles, California. She is the daughter of former actress Ellen Marano and college professor Damiano Marano. She is the youngest child of her parents. Her father’s ethnicity is Italian while her mother is British-Irish. Her mother is the owner of the Agoura Children’s Theatre.

Laura’s elder sister is Vanessa Marano, who is also an actress. Laura and her sister worked together in a movie named Without a Trace and Dexter.

Laura attended a traditional school in Los Angeles. She enrolled herself as a part-time student at The University of Southern California.

Laura started her career as a child actress at Stage Door Theatre, where she worked on several projects. In 2005, she was featured in a psychological thriller film named The Jacket, in which she portrayed the role of Young Jackie. She also portrayed the role of Kate Malone for four consecutive seasons, in a drama called Without a Trace from 2003 to 2006.

Some of her notable works are ‘A Cinderella Story: Christmas wish’, ‘The Perfect Date’, ‘Lady Bird’, ‘Back To You’, and ‘Austin & Ally’. Her upcoming movie ‘The War with Grandpa’ will be released in 2020, in which she will be seen in the role of Mia Decker.

She also worked on a radio talk show, ‘For the Record with Laura Marano’. She released her first music video ‘Let me Cry’ in 2019. She has performed as a vocalist in many theatres. She even contributed her voice for a soundtrack of ‘Austin & Ally’. She has recorded one duet with her co-star of Austin & Ally, Ross Lynch. She dropped her debut EP ‘Me’ in 2019 and ‘F.E.O.U’ in February 2019.

In 2012, there was a dating rumor spread about Laura and her co-star of Austin & Ally, Ross Lynch. But they turned down the rumors, stating they were just good friends.

Later, Laura was in a relationship with Andrew Gortin in 2014. However, the duo’s romantic relationship didn’t last long and they parted ways. In 2019, Laura is allegedly dating Cameron Jebo. They worked together in a series named ‘Austin & Ally’, where they shared a good on-screen and off-screen bond. Unfortunately, neither of them has revealed their relationship.

Laura Marano’s estimated net worth is over $3 million. She has accumulated throughout her acting and singing career. Her fortune will continue to increase shortly.

Laura is active on social media platforms. She has an Instagram family of 9.7million with 969 followings and 1514 posts. Laura has a Twitter account with 1.8 million followers and 975 followings. She is also a YouTuber. Her YouTube channel has 603k subscribers. She has an official Facebook page has 2,458,274 likes.

Honest With You is officially out! I am so proud of this song, and I can’t wait to hear what you guys think!!! I mean,…