Marcus Lemonis is a phenomenal businessman, a politician and a famous television celebrity. In a short period, Marcus has performed numerous roles at different levels. He was not born with a silver spoon and had a humble beginning. But today he is one of the most successful entrepreneurs.

Well! It would not be wrong to say that Markus Lemonis is an enigmatic personality who has the power to inspire a million minds.

Currently, Marcus is the CEO and chairman of Camping World, Good Sam Enterprises, Gander Outdoors. Along with this, he is a celebrity host for a CNBC reality show “The Profit”. The reality show is about small ventures and business owners. 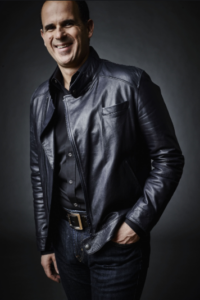 Markus Lemonis had a severe birth and adoption. He was born during the civil war. Due to specific reasons which remain unrevealed, he was soon abandoned by his biological parents Abdallel(from Lebanon) and Nadia(From Baniyas, Syria). Shortly after four days of Birth, he was given in an orphanage. On July 29, 1974, during infancy, Markus was adopted by Leo and Sophia Lemonis. His parents comprised of Father (Greek) and mother(Lebanese).

Gradually growing up, he attended Christopher Columbus High School and then earned a bachelor’s degree in political science and criminology from Marquette University.

Failure as a political face brought Lemonis interest awakened in automotive. He soon started working along with his grandfather in the automotive business.

The automotive business was acquired in 1997, and Lemonis was given managerial roles under the new ownership. After serving as a manager and gaining experience at different levels, he soon thought about starting his own business. An opportunity came along the way when friend Lee came up with the idea of starting the “Largest RV chain.”

The Television Journey – The Profit

In 2013 Lemonis became the face of the popular small business helper show called “The Profit.” Small businesses that are struggling to survive can register.

Lemonis promises to help such businesses to gain viability by investing a certain amount. However, Sources reveal that this show has a darker side to it. Lemonis found his spouse “Bobbi” on the same show.

Recently, in 2017 he co-produced and hosted a show called “Partner” on CNBC, where he interviews and searches suitable business managers for the businesses he acquires or owns in “The Profit.”

The story released on Inc.com suggested that Lemonis acting as a savior for small businesses is a myth.

In reality, Lemonis is a consolidator and negotiator. He effectively knows the art of persuasion. He learned it from the very beginning while working as a sales manager for automotive.

Lemonis is the current CEO of Camping World, a company having a $2.2 billion market. Markus Lemonis LLC has numerous companies under its umbrella. Most of these companies have been owned via “The profit.” These companies deal in fashion, food, entertainment, graphics, and candy store.

One of the acquisitions covered under the Inc.com was the boutique and clothing line Courage b and Denim &Soul. Both of these companies made an appearance on “ The Profit.” Runaway, a company owned by Raffel, was also encountered by Lemonis on the same show.

Raffel soon married her boss Lemonis. Raffel is 20 years junior to Markus. Lemonis boasting himself as an enigmatic savior of small businesses seems a little dramatic and overfilled discussion.

Well! Ultimately a businessman’s mind is limited to profit. Small businesses getting shelter under Markus Lemonis LLC may find peace there.

Markus Lemonis enjoys celebrity gaze. He is invited as a guest speaker for various motivational events. His story inspires many youngsters aiming to start business or work in the same arena.

He may not be an innovator like steve jobs, but he certainly masters oratory and negotiation. He married Roberta Raffel in 2018.