Simonetta Stefanelli Simonetta Stefanelli is an entrepreneur, an Italian actress, and fashion designer. She is best known worldwide for her appearance in the 1972 film The Godfather, as Apollonia Vitelli-Corleone, directed by Francis Ford Coppola. Her other performances include arrivals in Three Brothers, Moses the Lawgiver, and Scandal in the Family. 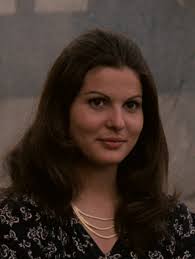 Simonetta Stefanelli was born in Rome, Lazio, Italy on November 30, 1954. She holds Italian nationality and belongs to a white ethnicity. She is 65 years of age as per 2020. Simonetta is standing tall, at a height of 5 feet 6 inches.

She has not opened up about her early life, so the details of her parents, childhood, and siblings are not known to the media. Simonetta seems to be very educated and intelligent but her educational details are not available.

Speaking of her personal life, Simonetta Stefanelli has tied the knot once thus far. She walked down the aisle with the famous Italian director and actor Michele Placido in 1989.

Violante is married to Massimiliano D’Epiro and the couple together had a son named Vasco born in 2013 making Simonetta a grandmother. Michelangelo Placido was born in 1990 and Brenno Placido, who is also an actor, was born in 1991.

At the age of 14, Simonetta began performing in Italian films. She made her first debut in 1968 in the film ‘La Moglie Giapponese’ (The Japanese Wife), under the direction of Gian Luigi Polidoro.

In 1971, she started to appear in several movies. She mainly gets roles in Italian-style sex comedies that were famous in those days. Very soon, as an actor, she started getting recognition worldwide with great potential.

In 1972, she got her first main break in the American international crime film ‘The Godfather,’ with her role as ‘Apollonia Vitelli Corleone’ directed by Francis Ford Coppola starring alongside popular actors including Diane Keaton, Marlon Brando, Al Pacino, James Caan, and Robert Duvall.

What is Simonetta Stefanelli Doing Now?

Stefanelli now owns and operates a fashion store in Rome called Simo Bloom after quitting her acting career in 1992 where she designed purses and shoes for her store.

However, in 2005, there were rumors about her death, which again emerged in 2008. Thankfully, she is fit and fine and surviving a normal life.

Through her acting career and business, Stefanelli has managed to collect a total net worth of $20 million as per now.

Simonetta did not want to get stamped on as a sex icon and was very conscious of her perfect body and good looks. As a result, she refused offers from Hollywood and inclined toward proceeding with Italian cinema and television.

Stefanelli shifted to London with her children for a while after her divorce and started living with her boyfriend who was the owner of a restaurant.

After her divorce, she chopped off her long black hair, turning them into blond to wear a new look. Nowadays, she resides in Rome.

In 1973, Simonetta came to be a youth phenomenon at that time by posing for ‘Penthouse’ magazine.