Desiree Ross is an emerging actress in America. She is widely known for her role as Sophia Greenleaf in Oprah Winfrey’s drama series, Greenleaf. She gained immense popularity after her appearance as Mira in the series, ‘Falling Skies’. 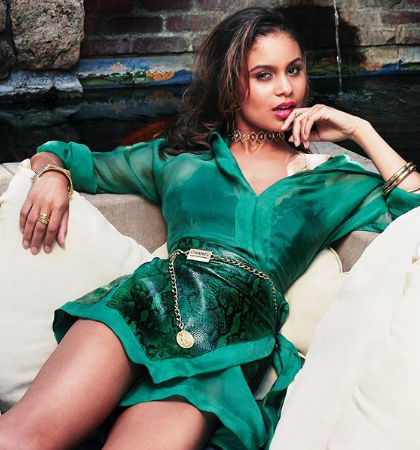 The talented actress was born on 27th May 1999 in Columbia, South Carolina. She was born to Brooke Ross and John Ross. Her mother is an educator. Her father is the owner of the Paradise Hawaiian Shaved Ice. He used to work at the Nephron Pharmaceuticals Corporation. John is also a real estate agent. She has a brother named Desmond Ross. In an interview, she revealed how her parents pushed her out to pursue acting. Desiree’s parents are her primary supporters.

The gorgeous actress is 21 years old. She is an American by nationality while her ethnicity is African-American. In an interview, she revealed her struggles in the industry because of her black ethnicity. She stated that “…because I’m like, they’re not gonna cast me for this because I’m Black”. She was born under the zodiac sign of Gemini.

Speaking of the academic perks of Desiree, there is no information regarding her educational institution or subject.

In 2012, Ross made her debut. She appeared in a minor role of a soccer player in the short movie,’ Park Bench’. The actress featured as Michaela in ‘Crossing the River’. In 2013, she portrayed the role of Grace Gibson in the movie, ‘A Country Christmas Story’. Desiree was able to stay in the spotlight for her portrayal of Grace.

In 2014, she got the recurring role of Mira in the post-apocalyptic sci-fi TV series, ‘Falling Skies’. In 2015, she starred as Dawn in the movie, ‘Chevy’. Ross appeared in the movie, ‘Secrets in the Fall’. She portrayed the role of Katie. The movie was a hit. And earned her recognition and fame.

In 2016 it could be marked as the peak of her career as she got the major role of Sophia Greenleaf in the drama series, ‘Greenleaf’. She appeared in the recurring role of Anna Redmond in the series, ‘If You’re Gone’. In 2020, she made her guest appearance as Yvette Barnes in the series, ‘The Resident’.

Desiree Ross has a net worth of $1 million USD. She also earns from brand endorsements and TV commercials. Desiree is a philanthropist. She is an active supporter of several charitable organizations. Ross also works as a mentor at the Chicago Art School. She serves as a motivational speaker.

Desiree is a lady of beauty with a brain. To date, she has gained millions of fans across the country. However, the actress is single and focusing her sights on her professional career.

Desiree’s on-screen chemistry with her co-stars is more famous than her real-life chemistry. Her chemistry with Roberto Calloway in the series, Greenleaf was much admired by her fans. Unfortunately, they turned out to be ‘just friends’ in real life.

Desiree Ross stands at a height of 5 feet 4 inches and weighs around 60 kg. She is one of the elegant and gorgeous celebrities in the entertainment industry. The actress often shares jaw-dropping pictures on her social media profiles. She has a pair of pretty black eyes and blonde hair.