LaTavia Roberson an American singer and a songwriter is known for the member of the R&B group Destiny’s Child. she is also an amazingly talented actress. she is also recognized for working in shows like The Real Housewives of Atlanta and R&B Divas. She also won three Soul Train Awards and two Grammy Awards. 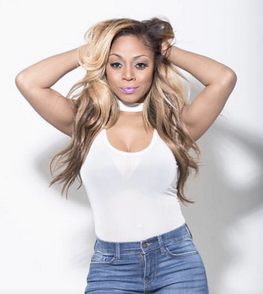 Her name is LaTavia Marie Roberson. She was born on November 1st, 1981 in Houston, Texas, USA. Roberson was a child model before starting her career through Destiny’s Child and appeared in advertisements like Soft and Beautiful’s just for me hair care relaxer for kids.

In 2010, After Destiny’s Child, Roberson suffered from an alcohol problem which led her into big trouble by being arrested with a DWI. But, Roberson went through counseling and is now helping the people who are facing the same problems.

LaTavia is presently in a relationship with her boyfriend Don Vito. The couple has two children. Her elder daughter Lyric Milan was born on 21st August 2013. In July 2016, Roberson’s health condition got serious due to complications with her pregnancy.

She was hospitalized and got full support from her fans and followers through their prayers. Unfortunately, by the last week of August 2016, she disclosed through her Instagram that she had lost the expecting baby girl. She was thankful to her followers for their full support. After 3 years of miscarriage, she gave birth to a son on 23rd September 2019 and named him Londyn Saint.

Don Vito also is known as Rodney Richard, is an American record producer. He started the DVP Agency in Atlanta, Georgia, and became its founder in August 2013. He helped brands and agencies to unite with celebrity influencers and social media bloggers with over 20 years in the entertainment industry.

Disney, Warner Bros, Mattel, and Bravo are a few of his clients. Moreover, he has also worked as a songwriter in the TV movie documentary, Knows Your History (in 2012), and TV special, 2010 Soul Train Awards. In 2005, Don Vito also launched a music and video production company, Don Vito Productions.

During 1990, LaTavia established the urban R&B group Destiny’s Child along with Beyonce Knowles, LeToya Luckett, and Kelendria Rowland. Beyonce’s father was the manager of the group who took the responsibility to make the group a successful one.

Rapidly, with their street cool image and impressive vocal harmonies, the quartet gained a lot of local fan followings. Furthermore, in 1997, Columbia Records signed their group, and their track “Killing Time” was released, which came up in the soundtrack of  “The Men In Black”.

In 1998, they released their self-titled debut album spotlighting collusions with leading Timbaland, R. Kelly, and Wyclef Jean (R&B and hip-hop producers). Both in the US and UK, the album single “No No No” along with other hits like With me and Get On The Bus reached in Top 10. But, due to the personal problems among all the four members, Roberson and Luckett were replaced and the group decided to add Farrah Franklin and Michelle Williams. Later with another singer named Nadia, LaTavia and LeToya formed another group and named ‘Angel’.

But due to some circumstances, the group didn’t last long, and LaTavia had to take a break from the music world. Later, she started working on TV shows like “Top of the Pops” and “The Real Housewives of Atlanta”. Now she is working as a motivational speaker, an actress, and as a radio host.

LaTavia’s net worth is calculated at around $2 million.