Luke Roberts is an English actor who first came to limelight after portraying the role of Joseph Byrne in the medical drama series “Holby City” on BBC One. He also gained popularity for other movies and series such as Pirates of the Caribbean: On Stranger Tides, Pull, Law and Order: UK, 300: Rise of an Empire, Wolf Hall, Dracula: The Dark Prince, and many more. 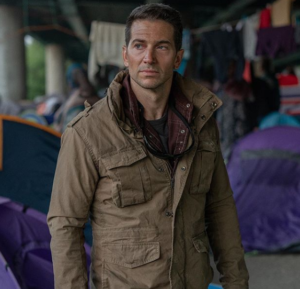 Charming artist Luke Roberts was born in Suffolk, England on 5th October 1977. Luke, the heartthrob of this generation, has reached the age of 43.

Besides his graduation, in 2000, he also visited the London Academy of Music and Dramatic Art.

Luke’s parents and siblings were like a happy family creating memories while growing up in England. Luke was the only person in the family making a career in the showbiz field while he came from an artistic background.

His full family is creative as his father and mother is the owner of fine art and photographic studio in Suffolk.

Luke also has siblings, one elder brother, and one smaller sister. Luke’s sister is an Art teacher and his elder brother is a world-famous professor of neuroradiology by studying Physics.

Seeing his family, Luke still chooses to work in a different field and make his career in acting.

However, his family supported him fully and now they all are happy for Luke to achieve success in his goals and career.

In 2001, Luke started his acting career by making his first acting debut in the TV series Crossroads.

Within a short span of time, he started receiving notable roles in the television series and started gaining public attention by his role in the series, “Holby Blue” as Joseph Byrne.

Luke appeared in one of the famous television series, Game of Thrones, as Arthur Dayne in 2016 from which he came to be more popular in the acting field.

He has not only made a name and had success from his career but has also without a doubt made huge financial success earning millions of net worth.

Already entered at the age of 42, Roberts is still not married so there is no news of his wife. Either he is always so busy in giving time to his career or he always tries to hide his dating records.

However, there is a rumor of Luke being in an affair with actress Freema Agyeman which arose around the social network in 2016. They were noticed together on several occasions but whether they were seriously in a relationship or not stayed a secret.

However, a long time back, he was also dating another senior actress Patsy Kensit but that relationship didn’t last long. Moreover, back in 2015, Freema shared some interesting pictures on Instagram with Luke but still, it is not confirmed whether they are dating or not.

Luke’s calmness about his relationship also created raised a question on his sexuality. But according to the reports, he is not gay and very straight.

Luke’s Net Worth is calculated at around $1 million. He was paid over $50 thousand dollars per episode for season six of Game of Thrones, which was the highest income of his career.