Marjorie Harvey a very talented and multitasker lady who is a fashion designer, stylist, fashion blogger, Instagram influencer, star, and whatnot, but people mainly recognize her by Steve Harvey’s spouse. 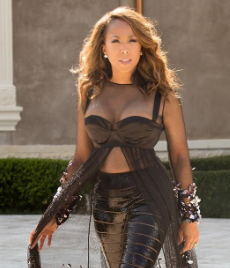 Steve Harvey is a very famous personality, and he is an American comedian, television host, film producer, radio personality, a great actor, and a beautiful author. Her lesser-known identity is exciting, Steve and Marjorie as a couple play a new character in their lives, here are all the facts you need to know about her. Marjorie was born on Oct 10, 1964, under the name Marjorie Bridges in a beautiful country, United States. Her ethnicity is multiracial.

She was not interested in studying, and she did her studies till up to the university level. Still, lack of interest led to poor academic performance, and hence she did not even complete it and dropped out for no reason. She dropped out of school at the University of Memphis. One of the primary purposes for dropping out was a lack of concentration in studies, and she was more interested in fashion, books were never her companion, but the manner was.

She made a career in that only by creating a clothing line. She and her husband founded the foundation called (SMHF)Steve and Marjorie Foundation. The main aim of this foundation was to improve the living standards of many people all over the world. She has her clothing line is known as Marjorie Harvey’s closet and even owns a range of handbags, which are very classy and worth buying.

she was married twice and, she had dated other men before marrying Steve Harvey. The very first man whom Marjorie married was a drug dealer in Memphis, and his identity is still not disclosed, it was kept out of reach of media later he was arrested and jailed for life for his illegal dealing activities, after this incident she divorced and looked out for other man named Darnell Woods, he was another drug dealer and made a name in the drug trade industry, He and his brother also got arrested after distributing drugs like marijuana and cocaine from Houston to Memphis in the year 2002. Of these two not-so-successful marriages, she has three children named Jason Harvey, Lori Harvey, and Morgan Harvey.

Steve Harvey, who is now the husband of Marjorie, was also divorced twice at the time. Steve also has four children out of his previous marriages, but both Marjorie and Steve don’t have any biological children among themselves.

When both Steve and Marjorie got divorced from their respective partners, they both got

attracted to each other, and their relationship began. Before they moved in with each other, they dated for a long. In 1990 they were separated by distance and broke up. Their connection was so secure that they started dating each other soon, and several years later, in 2005, they met again and got married in 2007. All the credit for their happy lives was given to Steve’s bodyguard, who made efforts to reunite the couple.

et worth of the couple gives an estimated figure of $160 million where Steve’s contribution is almost $100 million, but Marjorie Harvey’s contribution remains unknown.